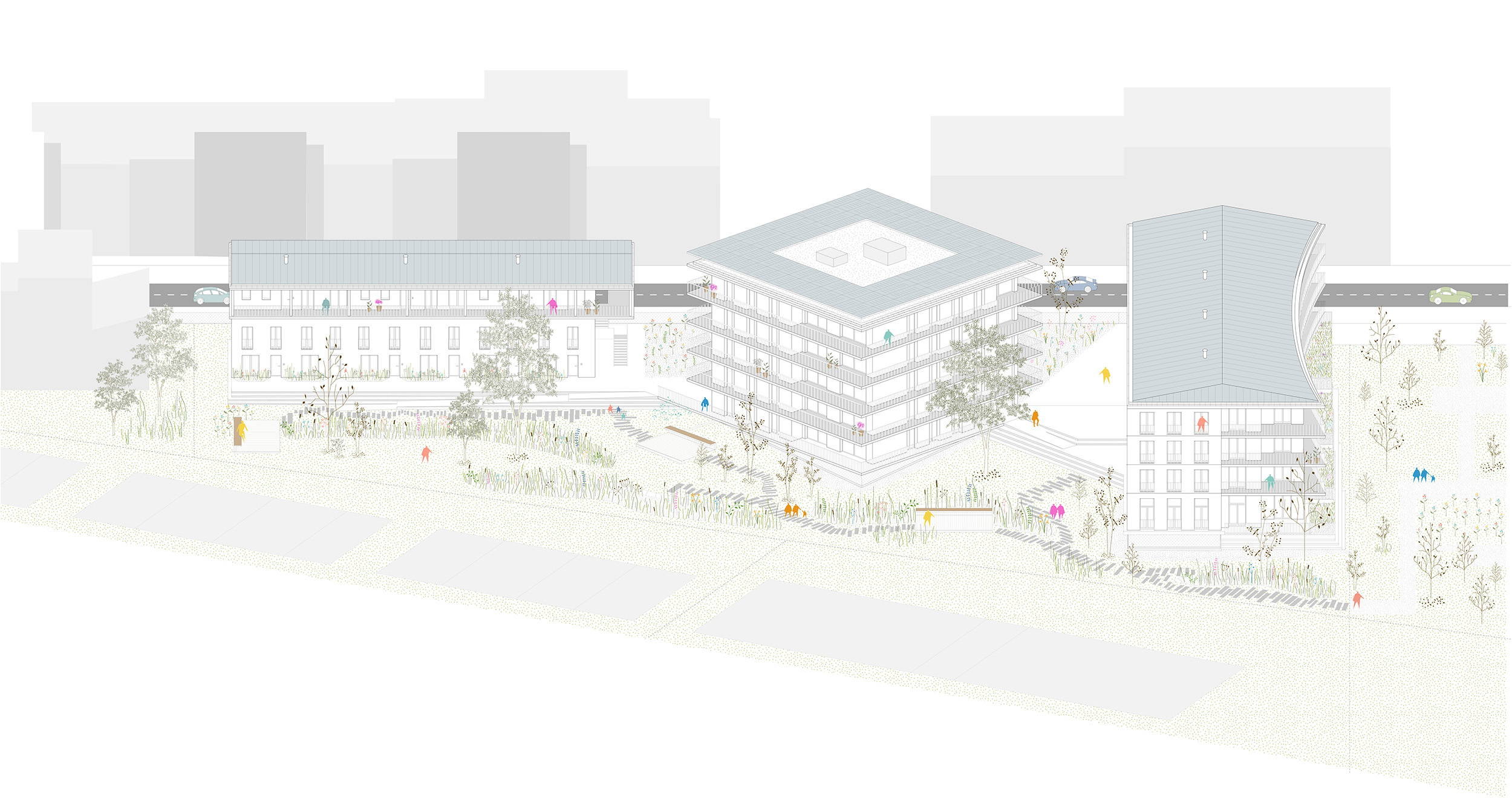 The project is divided into 3 buildings in order to precisely qualify the relationships with its close environment. To the east, a small and narrow building ensures continuity with the bulk of the adjoining buildings ; at the centre, a four-storey building creates, by its 45° orientation, a strong transparency towards the heart of the plot, and brings a great fluidity to the routes of the ground floor ; to the west, by the curvature of its balconies and the indentations of its facade, an elongated building offers to the neighbouring square an urban scenography which reinforces the status and interiority of this central place of the district.

topography / landscape The project landscape is articulated in two entities, a courtyard located at street level, which gathers the accesses and the main common premises, and a garden in the slope whose atmosphere extends that of the adjacent parcels. On either side of the central building, steps allow a direct link between these two entities. The ground floor level of the West building, located perpendicular to the slope, is broken down into four successive plateaus that extend along the slope, providing each dwelling with direct access to a garden.

typological variations The implantation principles and morphologies are conceived with a concern for optimum sunshine, typological diversity, and adequacy between the thickness of the buildings and their internal organization. The East building includes north / south duplex townhouses, and deck-access units on the top floor. These dwellings are all accessed along their northern facade, kitchens acting as a buffer with the more intimate spaces of housing. The central building, organized on a square plan, is structured by a single-core serving four dwellings per floor. They are organized around a roomy lobby that articulates day and night zones, and all the rooms benefit from an external extension creating a protective threshold space whose thickness varies according to the uses. The West building is distributed by two naturally lit staircases. The thickness of the building varies according to the typologies, the central part, narrower, housing two east/west dual-aspects dwellings, while the two bows, thicker, allow corner units. All kitchens benefit from a dedicated room set up like an alcove in front of the facades. 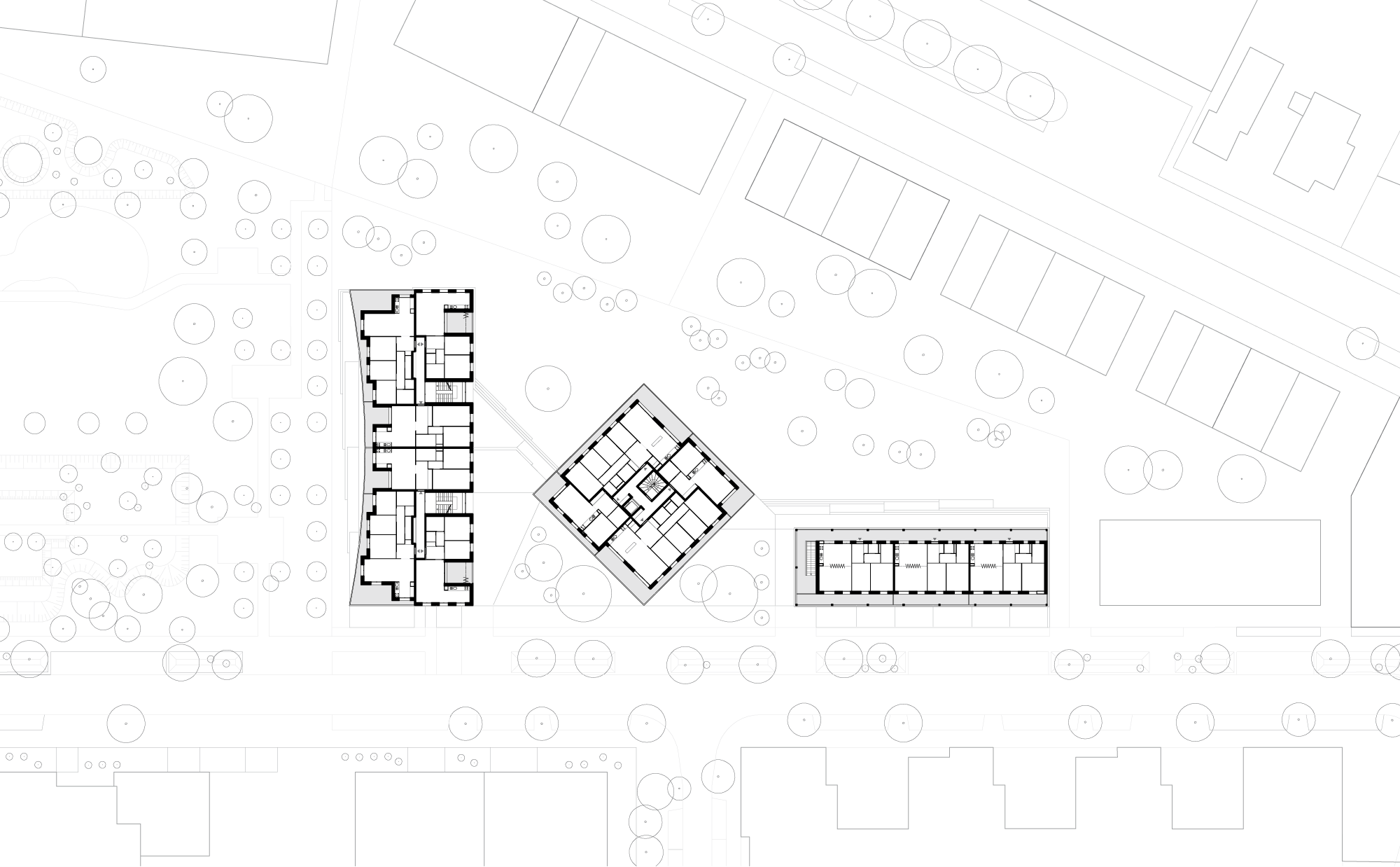 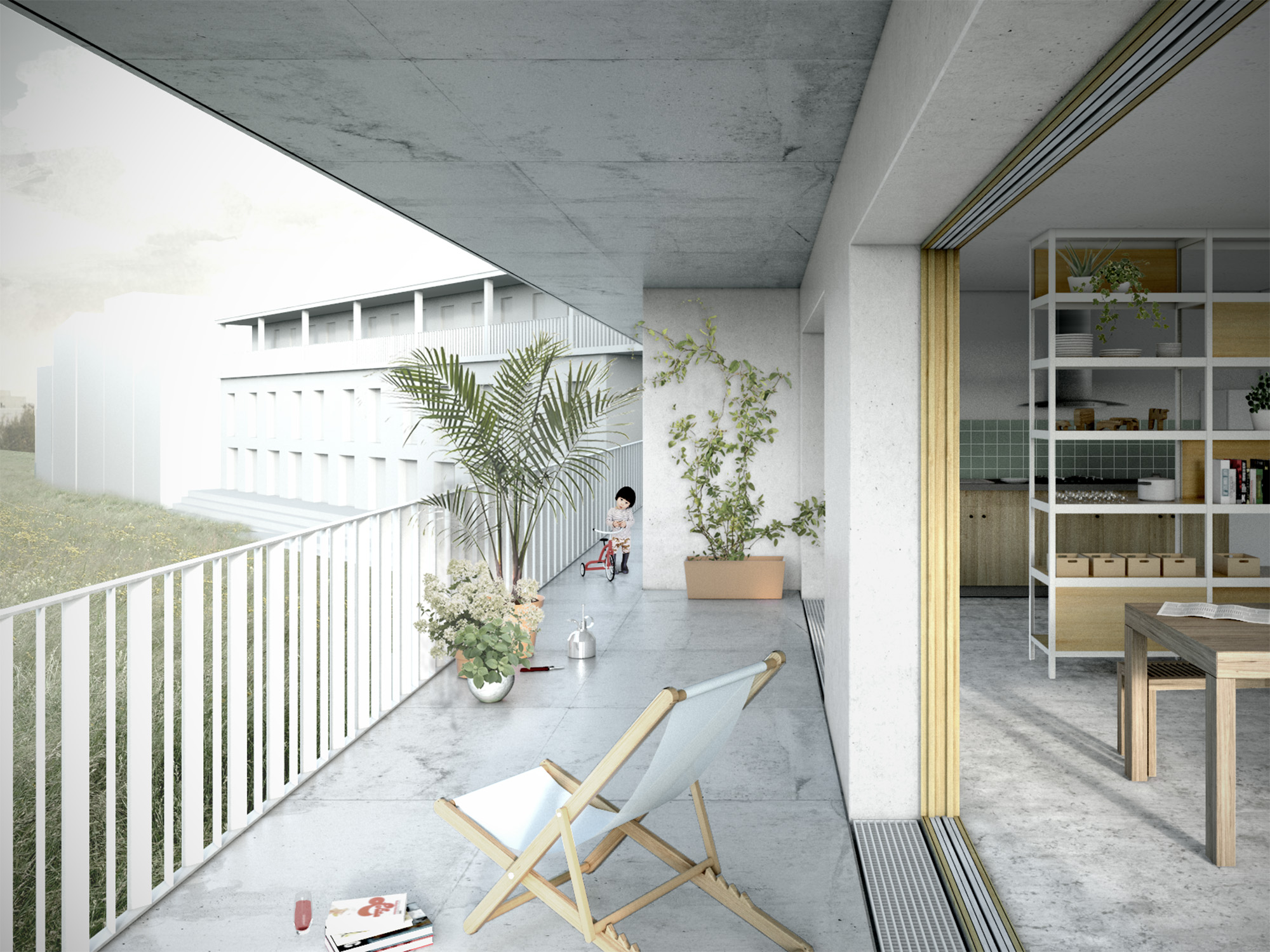 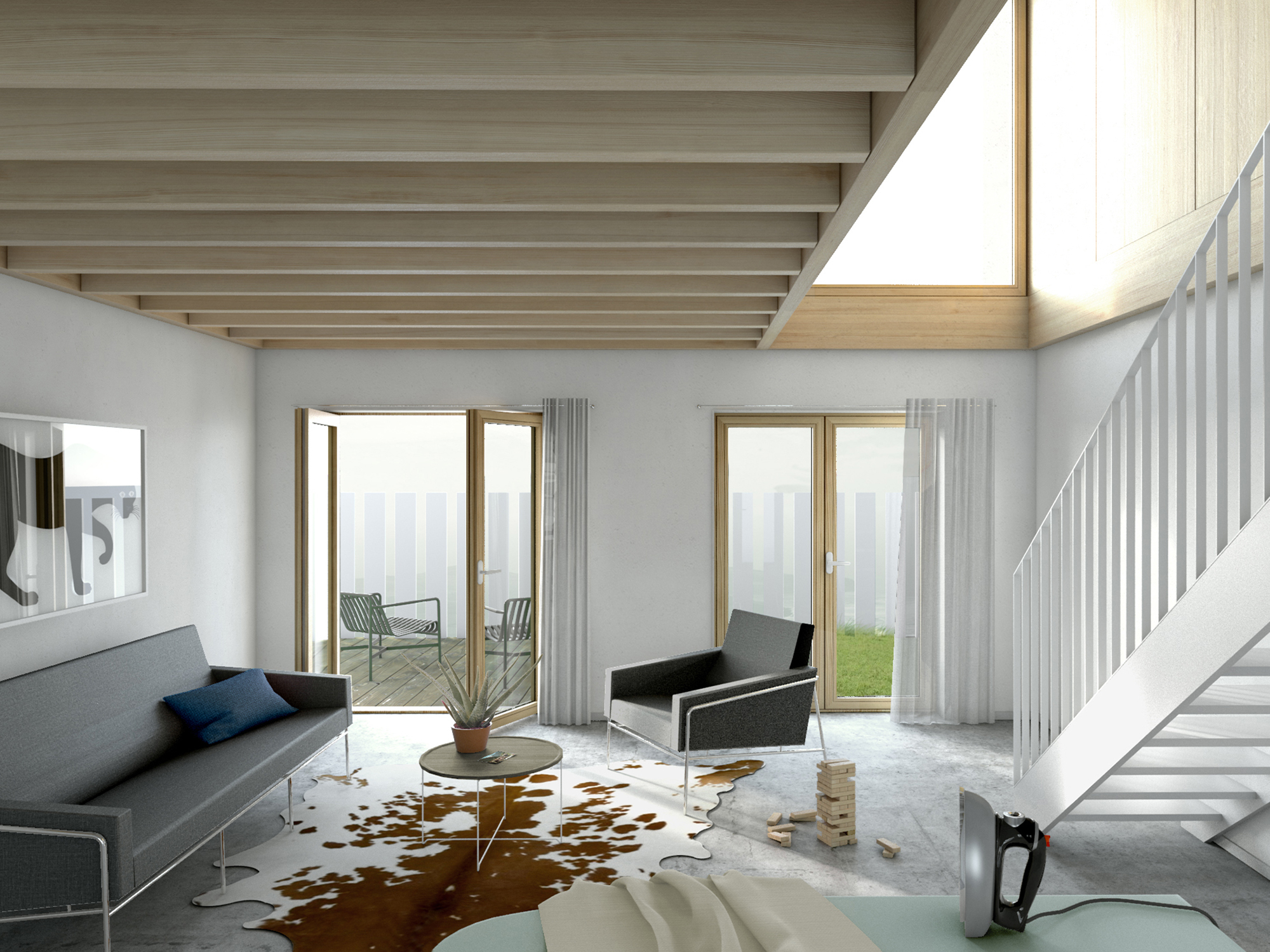 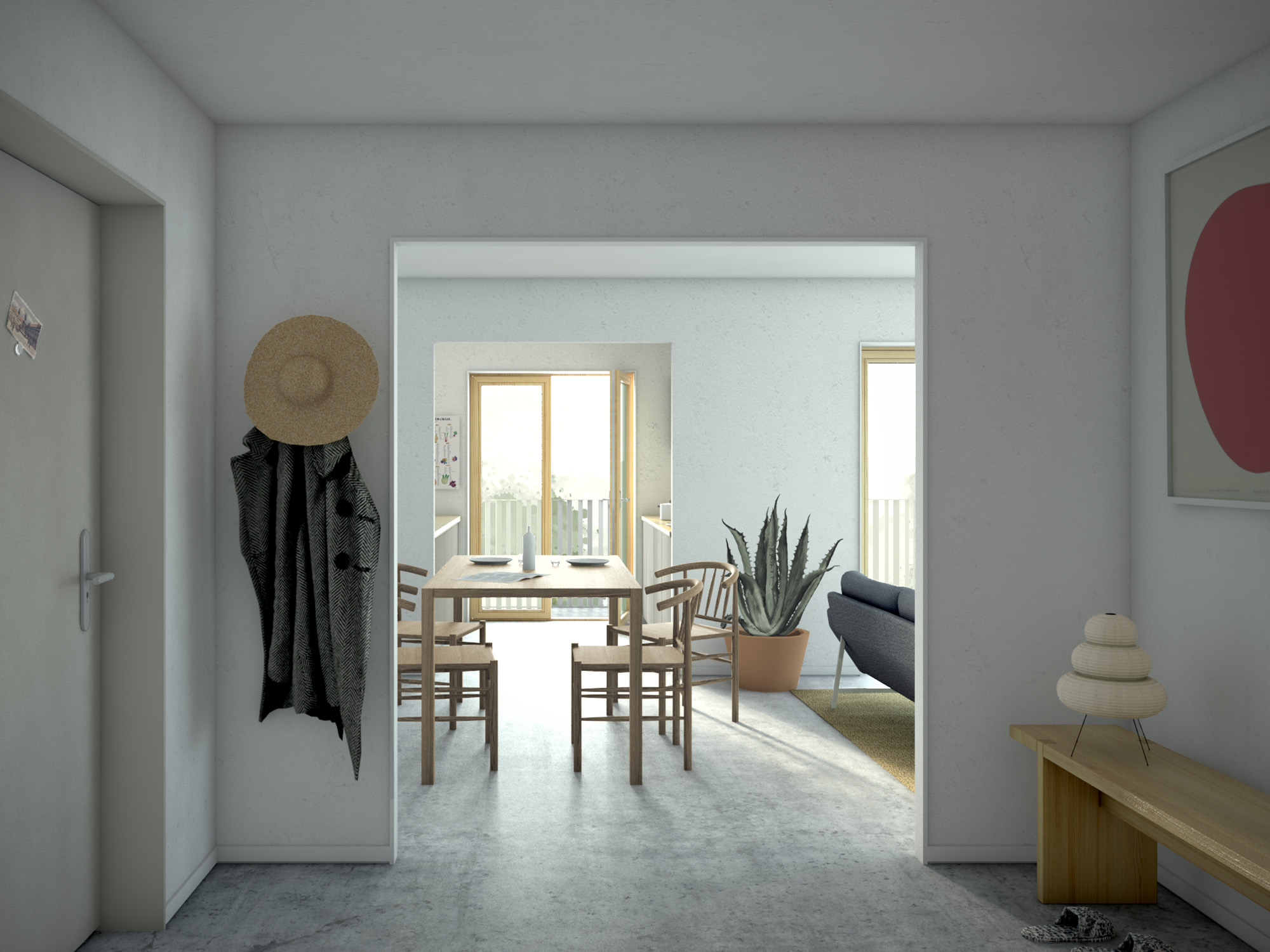